You are here: Home / Promotions 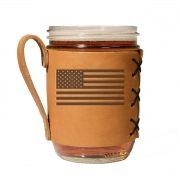 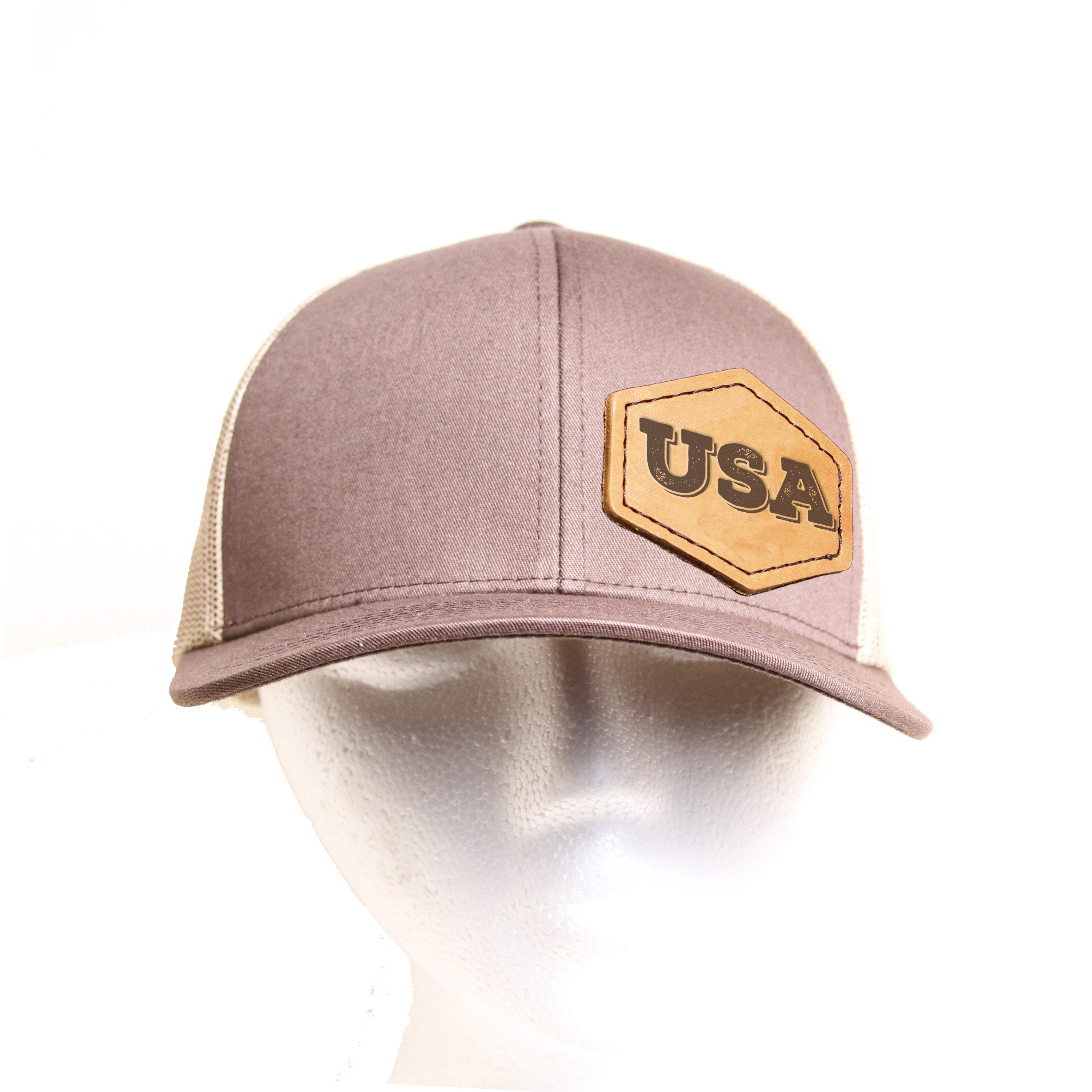 It’s that time of year again!

Backyard BBQ’s, baseball games, lake trips, etc.  Time for long lazy summer days- for some lucky folks!  July is a time to reflect on the first half of the year, ease back and sip on an ice cold beverage in the warm sunshine. Think about where you’re going, where you’ve been. Time to cut the grass and get the yard looking good for that Independence Day party. 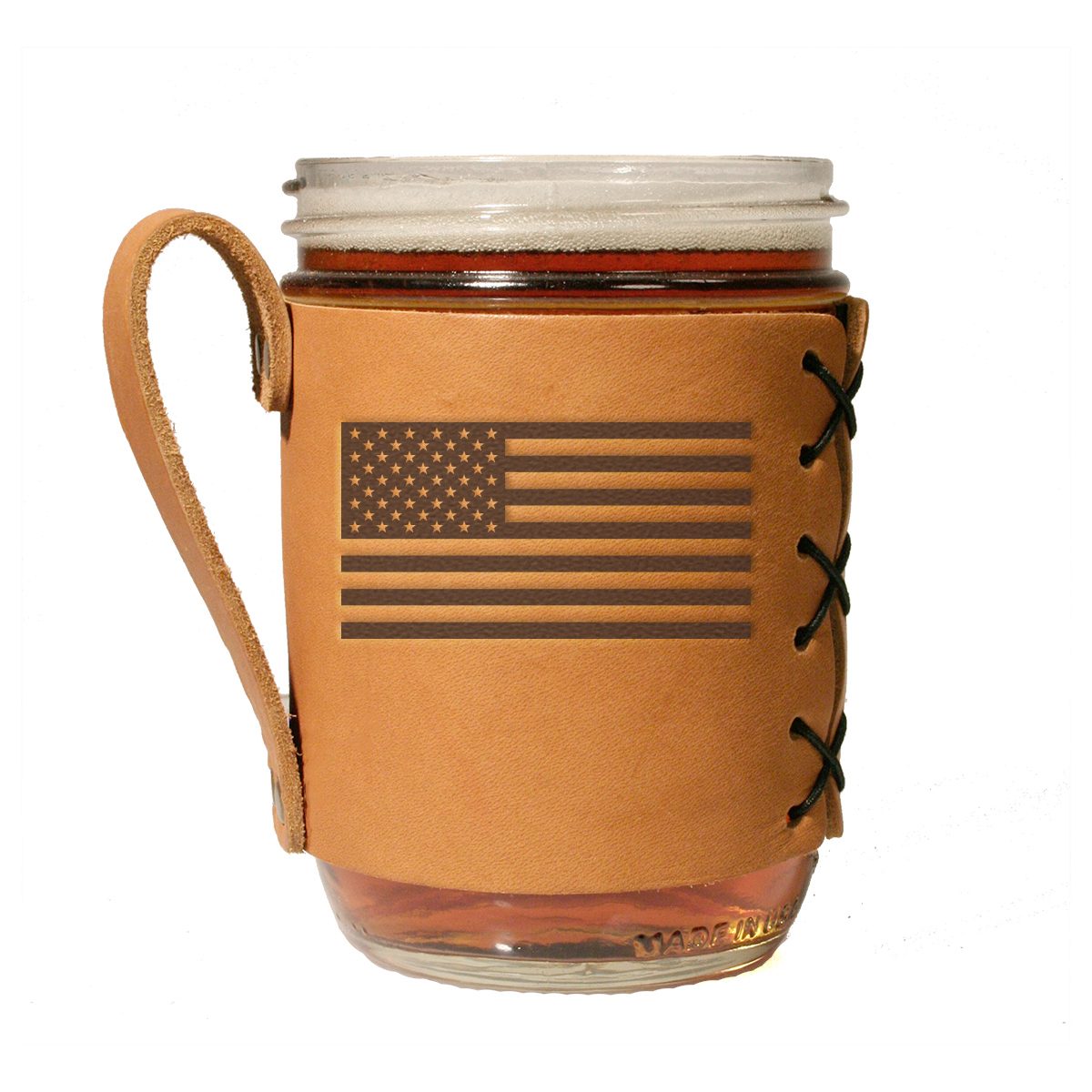 Oowee Products has released a few specialty logos to help get you in the mood for America’s birthday!!  We celebrate it year round, but  once a year is just fine too!  Who doesn’t love drinking sweet tea? Out of a mason jar?? With a custom leather sleeve???  All this luxury could be yours for the taking.  Just visit our webstore, or give us a call and we’ll set you up.  We’re offering free shipping and 15% off site-wide!  Jump on a great deal while you can. 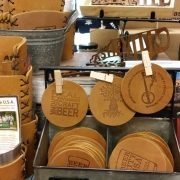 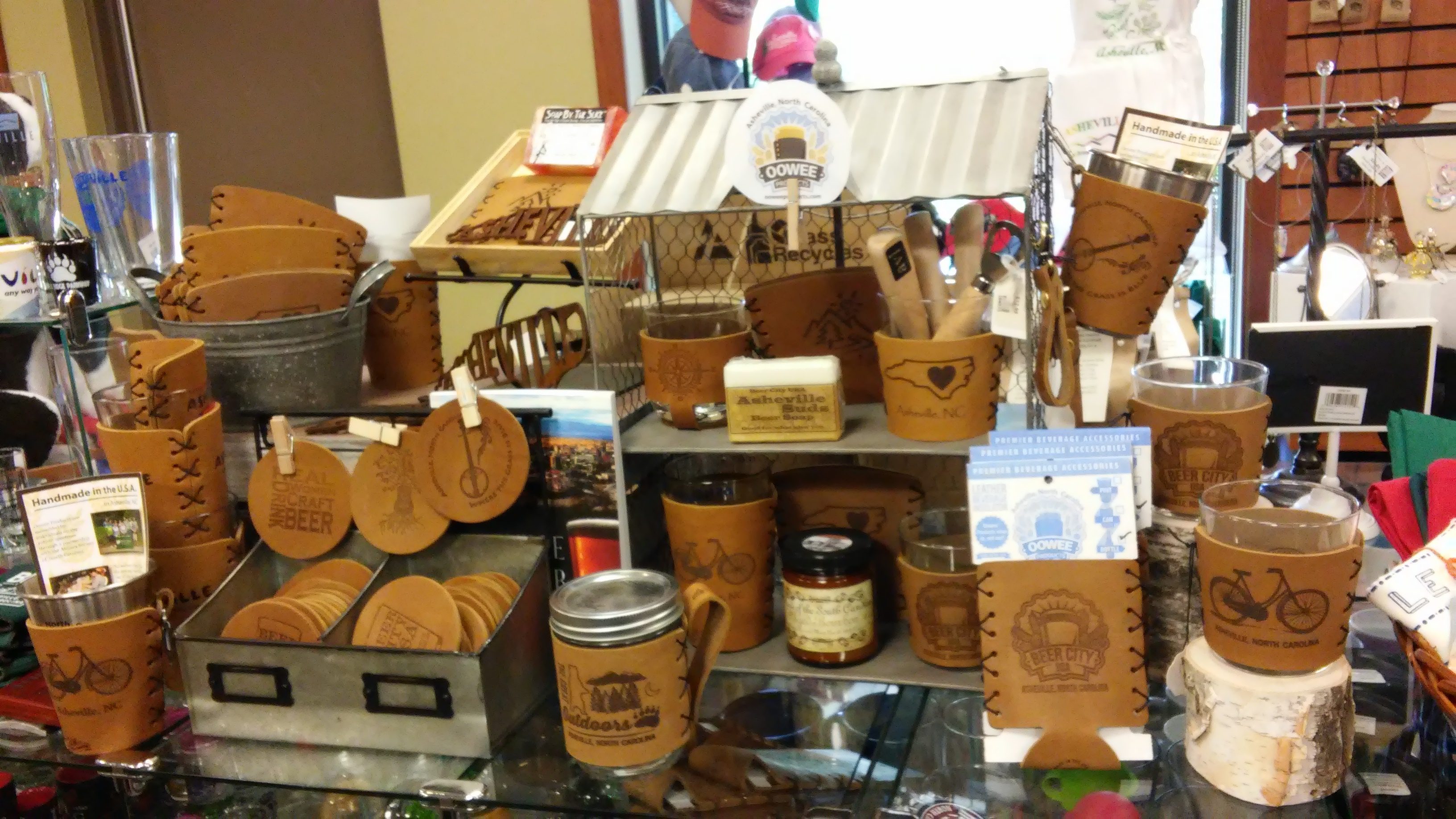 It may be too late to order online for Father’s Day, but if you are in the Asheville area, you should check out some of our local retailers!

Retailer shops to check out:

And of course, you can always stop by one of the local restaurants, shops and breweries that carry our sleeves.

This year Oowee Products decided to join a promotional sales network. We are happy to announce that our leather drink sleeves got a nice little feature in one of the promotional videos.

This guy gets it. We offer custom branding (heat stamped or full color logos available). Not only will the insulator keep your drink cold and your hands dry; these sleeves are made to last a lifetime! Order your Oowee® sleeve today!! 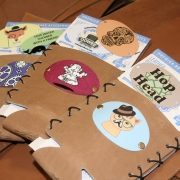 Yay for May! We are offering up some great mark-down deals for the month.

Through the month of May, we are running a clearance on our red leather. Add some color to your spring line.

*Available for Orders of 25 pieces or more*
*While Supplies Last* 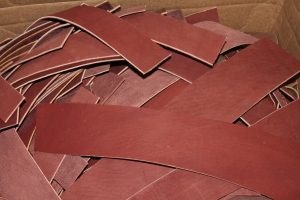 Did you know that we can put your full color logo on any of our products? Make a statement with color.

*Available for Orders of 25 pieces or more* 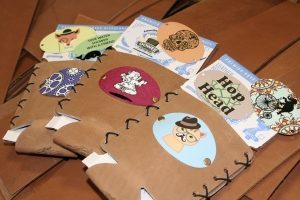 See the full newsletter at http://eepurl.com/blaKhL

April showers have been pouring down, to bring us some beautiful May flowers. Let the flowers last and give mom something different this year!

This year get your mom a leather Mother’s Day gift that will last a life time. Our leather sleeves make excellent Mother’s Day gifts for hard working moms that go the extra mile. We can add your custom images, names or text branded or etched directly into our custom leather koozies. Our custom leather koozies or hungers or cozy have branded images that will NEVER wash off or fade away. Oowee Products are all natural and responsibly manufactured in the USA. Unlike other foam beverage insulators, leather will eventually break down and biodegrade. We are proud to manufacture natural hand crafted products that will not end up in the bottom of the ocean.

OOWEE PRODUCTS WEAR IN — NOT OUT 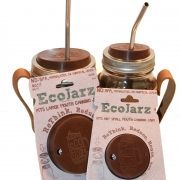 It is Easter weekend and a sign that it is really spring time! Time to get your picnic sets together; get the camping gear cleaned; set up the patio and outside drink station.

Add to your drink-ware sets by adding our eco-conscious beverage sleeves. We have reusable travel sets for stainless steel cups and mason jars.

Show off your personality with custom sleeves for your favorite drinking vessel. Pick one of our ready-made designs and add your name, or just make something that is unique just for you!

Hop into Spring! It’s time to stock up on your drink sleeves before it gets too hot!!!

SAVE 15% AND GET FREE SHIPPING
PROMO: HoppySpring

Getting married? Forming a team? Well, whatever you are getting into the coming year, you need to get your personalized leather sleeves for you and your friends!

Oowee Products is now offering custom group sets of all of our sleeves, that can be branded and personalized. Use one of our stock images and add names, or create your fully custom logo. These are great for the family, group vacations and wedding parties.

You send us the image, and we can make it happen. Order sets of six or more and get the quantity discount!

Here at Oowee, we are gearing up for the Holiday Season. We are coming up with some awesome gift packages for the homebrewer in your life. Watch our Facebook page for updates.

We need your help boosting our status! We will be giving away up to 3 prize packages, based on the number of reviews. Winners will be chosen at random from reviews left during the month on October.

Please add to our review accounts:

We thank you for your continued support, and wish you luck during our month of product give-a-ways. 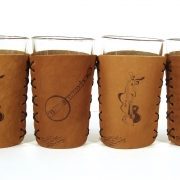 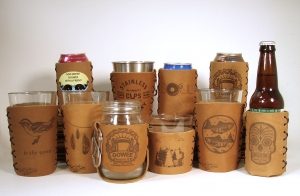 Oowee is getting ready for the Spring, festival season!

This March, we’re making new rocks glass sleeves, pint glass sleeves, cans and bottle sleeves! We are working hard to get some exciting “Ready Made” leather sleeves prepared for the World Beer Festival in Raleigh,NC. It’s coming up in just two weeks.  If you’re in the Raleigh/Durham area it would be a fun beer festival to check out! It’s Saturday April 5th in beautiful Moore Square Park, downtown Raleigh. There are two sessions. One is during the day from noon to 4 and then there is an evening session too from 6-10pm. They plan on having tons of craft beers, food trucks and awesome merchandise like Oowee’s leather sleeves. 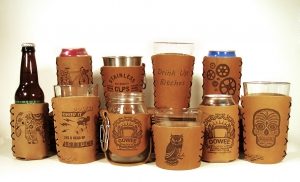 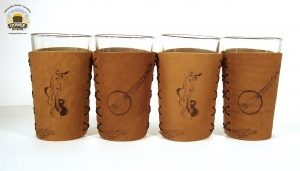 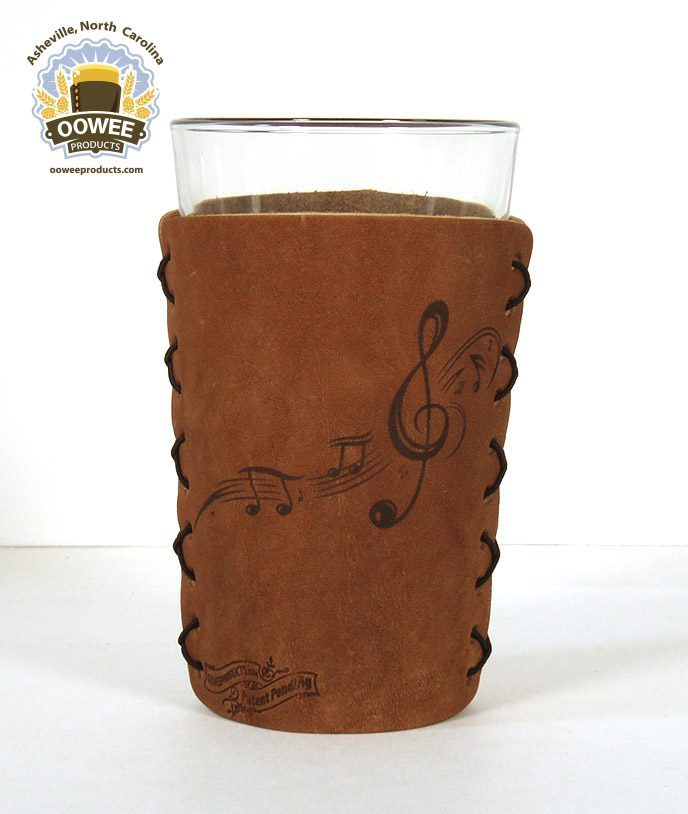 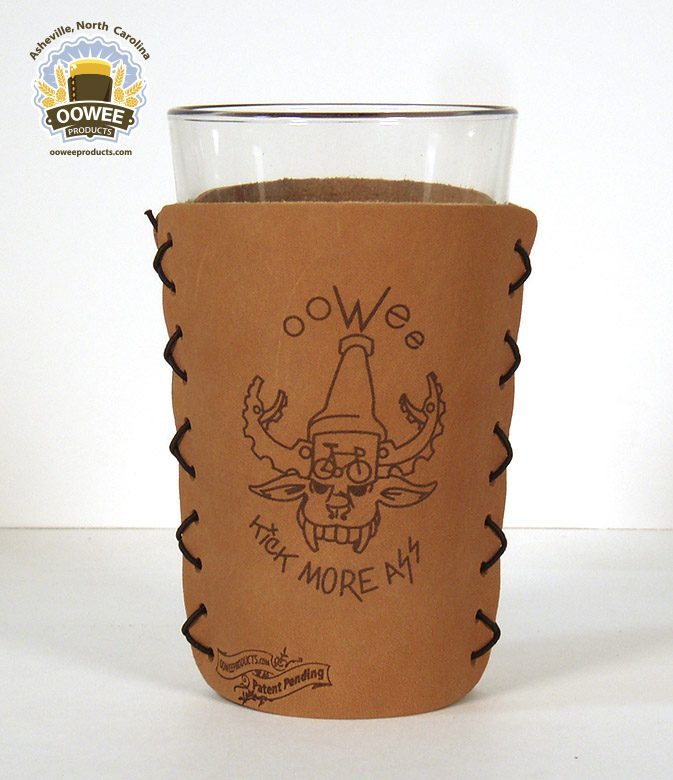 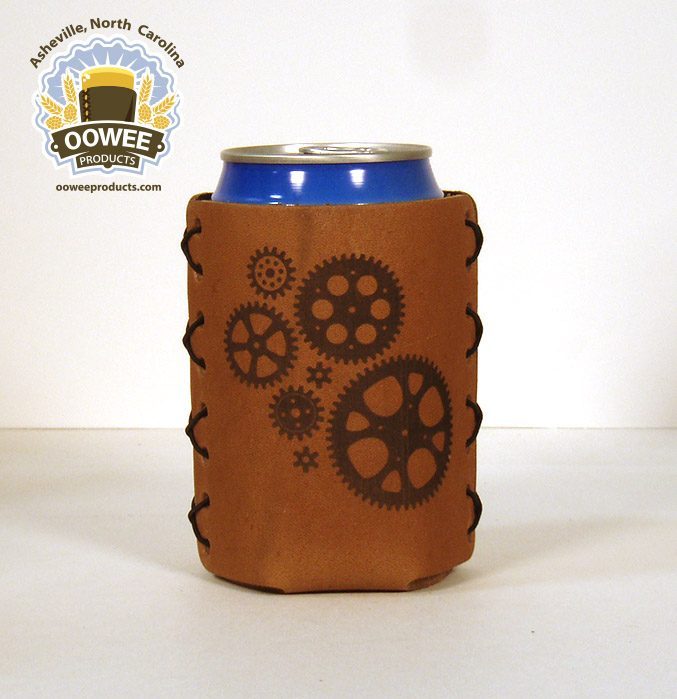 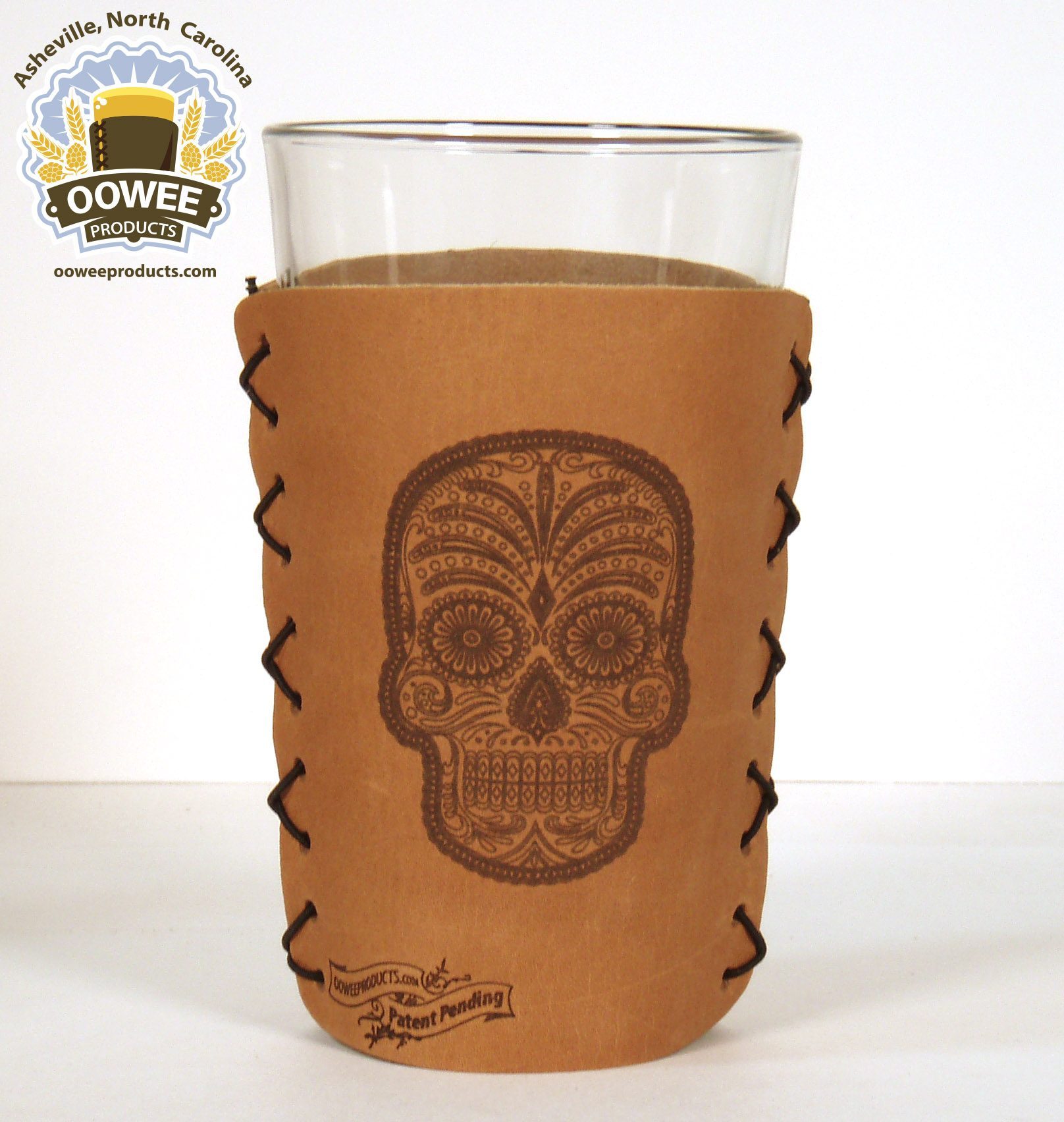 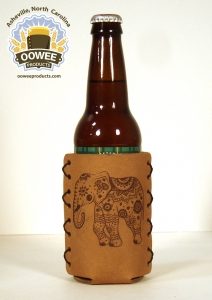 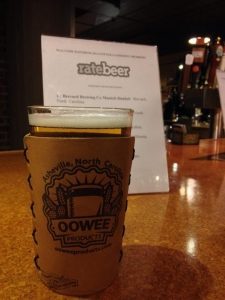 The rate beer group rallied in Asheville this past weekend! It was a great success! Thanks to John Owens and Beau Shine for all their had work and effort! They helped everyone have a rollickin’, good time! Oowee was honored to help sponsor the event by contributing some leather pint glass sleeves for the cause of good craft beer!

The craft beer festivities kicked off with a  Meet & Greet at Barley’s offering dinner and special kegs for the beer lovers and connoisseurs. After the Meet and Greet, Brews Cruise ran a shuttle so folks could go to  Appalachian Vintner and Thirsty Monk. 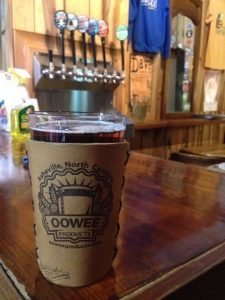 On Friday, things started up pretty darn early with a trip out to Oskar Blues at 8:30am!  These guys don’t mess around! The group bounced from there to Catawba/French Broad around 10am. Sunny Point and Oyster House were the noon time stops and great places to grab a bite to eat. Sunny Point was kind enough to have some delicious food ready for the RateBeer group. Next breweries in the line up were Pisgah and Wedge and they capped the night with some dinner eats back downtown at Mamacitas. 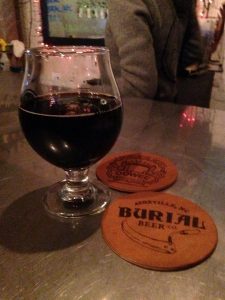 Okay, so you think whew, that’s a long day of brewery love, right? Well, for these guys it’s just the beginning! On Saturday the action doesn’t start up until 11am… peeps gotta’ be able to sleep in after such an awesome Thursday and Friday! So, after some shut eye, they began with a bang at 11 at Wicked Weed for a tour and some sampling of specially crafted brews. Next on tap was Burial and Green Man; everything was in easy walking distance. The Grand Tasting was from 3-7 which left plenty of  room for folks to take their time enjoying the south slope of downtown. That Grand Tasting was located Asheville Music Hall and had a fun array of bottles and kegs!

RateBeer really knows how to put together an eventful few days. Getting all this to come together has got to be a lot of work! All for the love of craft beer!

Thanks to Travis Nevill for supplying photos!

FREE SHIPPING ON ORDERS OF $40 OR MORE!